← Can medication help?
What’s wrong with this sentence? Plenty! → 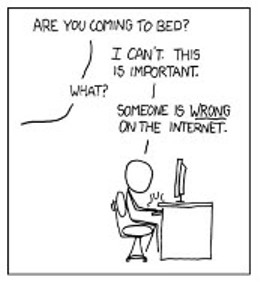 1) “My neurologist told me that after I turned thirteen, I would be able to play video games again if I wanted to. The reason that I had the seizure was because from a certain age until the age of thirteen, your brain waves are more vulnerable, so the flashing light patterns can cause you to have a seizure.”

Young people between ages 7 – 19 are the age group most likely to experience photosensitive seizures. But the condition is outgrown in only about 25 percent of cases, and that usually doesn’t happen until after age 20. Researchers have not found a way to predict which cases will be among the small number that remit.

2) “There is no evidence that viewing or playing video games on a large screen induces seizures in normal healthy people. If this was the case then any large screen TV watching or movie theatre going would be a risky activity.”

There is ample evidence that viewing or playing video games on a large screen can induce seizures in “normal healthy” people if they have a genetic trait that makes them vulnerable to the effects of flashing light. The larger the screen, or the closer one is to the screen, the greater the impact of the light on the brain. This is why doctors advise sitting at a distance from the screen as one way to avoid visually induced seizures from video games. Flicker in a small portion of an individual’s field of vision is much less likely to provoke a seizure. Sitting up close to a video screen you’re likely to fill a greater portion of your visual field than when you’re sitting even towards the front in a movie theater. In addition, the brightness of a video screen and the flashes it displays is generally more intense than what is projected on a movie screen. Movies with lots of flashes of light and quick cuts (think action films, anime) can trigger seizures, too, but they are less likely to do so.

3) “If you have epilepsy already, actually playing games with flashing lights will trigger them right away. You cannot *make* yourself epileptic….The fear with video games is that people who would have never found their trigger would start to. But it doesn’t work on a delay action like that.”

Approximately three percent of people with epilepsy can experience seizures when exposed to flashing lights. This is also true for an unknown number of people who do not have classic epilepsy. Sensitivity to flicker—photosensitivity—most often emerges between the ages of 7-19. However, the trait can remain dormant until a particular combination of environmental factors result in a seizure. If you have the photosensitivity trait, you may not know it and may never experience a seizure until you’re exposed to sequences with qualities that cause you to have a seizure.