Whether or not DVDs marketed to stimulate educational development in babies and toddlers provide a headstart on learning, their visual content may be provoking seizures in viewers. When I tested a number of the Baby Einstein and Brainy Baby DVDs, I found some sequences of patterns and flickering that could easily provoke seizures in someone with photosensitive epilepsy. 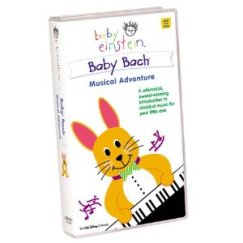 Who would even consider the seizure risk from DVDs for babies? Not the producers, apparently.

The Harding Flash and Pattern Analyzer found no violations of seizure safety guidelines in most of the DVDs I tested, and those containing violations were not full of seizure-provoking sequences. For anyone vulnerable to visually induced seizures, though, the offending sequences are very clearly quite unsafe to watch. Even brief sequences of a few seconds of flickering images can trigger seizures in some people, even if they have no history of seizures. A soothing DVD for babies isn’t where you’d expect to be bombarded by images that in some people cannot be viewed without triggering a seizure.

The spinning pinwheel in Baby Beethoven

Flicker doesn’t always look like a light pulsing on and off. The pattern and flicker sequences in these DVDs that failed to meet criteria for seizure safety included screen-filling images of a swirling black and white spiral, a rotating pinwheel, interlocking gears in motion, and “snow” in motion that looks like a TV signal problem. The rotating pinwheel has small gaps between the colors so that when the pinwheel spins, in effect the colors and white areas create a flicker.

To be clear, photosensitivity has never been found in children under age 2, and it typically doesn’t emerge until age 6 or 7. The brains of babies may not have developed to the point where viewing these images might actually provoke a seizure. But who’s to say these images might can’t create some form of neurological stress in very young children? Then, of course, there is a seizure risk to any photosensitive parents, siblings, caregivers, and others who might be watching alongside the baby.

This rotating spiral fills the entire screen for 5 seconds during Brainy Baby Left Brain in a sequence that could trigger seizures. Even a small still image is hard to look at!

In addition, researchers have raised the possibility that one factor influencing the emergence of photosensitive epilepsy in an individual is that person’s cumulative exposures to visual stimuli. The theory is that each time the brain processes these intense visual experiences, its capacity to absorb more of them is reduced a little. Add all of those incidents up, and the brain eventually uses up its lifetime ability to normally absorb any more of these experiences. From that point onward, vivid patterns and flashing lights and images can provoke seizures.

Note that home videos are not subject to photosensitive seizure regulation in any country. The UK and Japan enforce seizure safety standards on broadcast TV, and the UK also provides at least a warning for movie theater audiences. New standards going through the approval process at the International Organization for Standardization (ISO) will eventually cover all image presentations, including interactive images.

In Baby van Gogh these gears spin for 12 seconds, a risk for anyone with pattern sensitivity

With thanks to Michael Rich, MD, MPH, Director of the Center on Media and Child Health at Children’s Hospital Boston for first bringing to my attention the spiral image above.