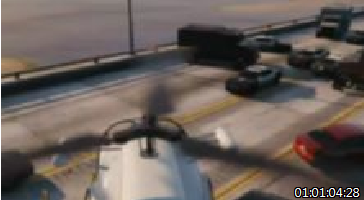 Grand Theft Auto V passed the seizure safety assessment test. This scene got close to the safety limit but stayed within it.

Say what you like about the just-released Grand Theft Auto V, but it’s not likely that the game will trigger seizures. You’d think an action-adventure game like this would be full of bright screen flashes that pose a seizure risk. I tested a lot of trailers and game play clips and didn’t find any scenes with unsafe-for-seizures visuals. Your results could vary, of course.

But I’ve got a hunch the folks at developer Rockstar Games are making the effort to make the game safe. In a few instances the flash level got close to the safety limit, but didn’t go past it, which makes me think the developers know where the official limit is (3 or more flashes per second) and have decided to respect it. While it’s possible that someone could, under the right circumstances, experience a seizure even when the flash level is near but below the danger zone, the chances of that happening aren’t high.

Unlike many immersive games with missions and quests, GTA isn’t set in an exotic fantasy world, where art directors might claim the need for artistic freedom (to use whatever visual effects they deem necessary). It’s not full of bright, flashing explosions. The appeal of the game is in the very down-to-earth characters, story lines, and realistic settings–not the quality of the visual experience. 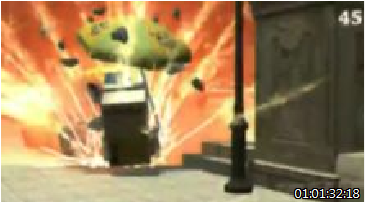 Scenes like this in Grand Theft Auto IV (2008) also passed the safety test because they did not employ quick sequences of alternating light and dark images.

Grand Theft Auto has evolved quite a bit since its beginnings as an arcade shooting game in 1997. The visual style of earlier versions, from 2001 GTA III and prior, is noticeably more jarring: jumpier, more flash, and indeed, a GTA III trailer failed the safety test.

Guidelines for seizure-free video sequences were developed more than 20 years ago in the UK in response to seizures provoked by TV. In 2005 the International Telecommunication Union, an agency of the United Nations, published recommended guidelines for reducing photosensitive seizures from television. These guidelines for safe flash rates and pattern movement could be applied to any screen-based media. I tested downloaded trailers for compliance with the safety guidelines using an application designed for this, the Harding Flash and Pattern Analyzer. 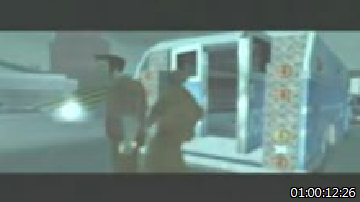 GTA III (2001) contained flickering scenes such as this one that failed the seizure safety guidelines. Rapidly alternating light, from dark (screen above) to bright (screen below) and back, create a strobe-like effect.

In its first three days after its launch last week, the game grossed a billion dollars in sales, setting a record for any kind of entertainment release. So much for the argument that making games safe will spoil all the appeal and fun. 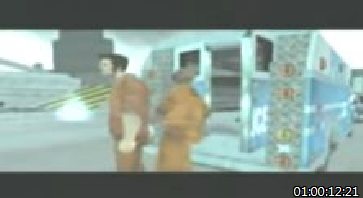 This brightly lit screen alternating with the darker version can trigger seizures if the flicker occurs 3 times per second or more.

Actually, maybe revealing that the game won’t cause seizures is not good PR for the company. Somehow a safe game doesn’t seem in keeping with GTA’s guys-will-be-guys attitude. Maybe Rockstar would prefer that customers don’t realize the game seems to lack seizure-provoking images. The average GTA player may not want to feel that the game has been “softened” in any way. In GTA culture, playing a seizure-safe game is probably for wimps.