The image shown in the upper left of this screenshot, from Nintendo’s Super Smash Bros., is one frame in a flashing sequence in  that fails the seizure safety test. The graph on the right shows the brightness of the flash exceeding the safe limit.

The 2014 E3 (Electronic Entertainment Expo) just wrapped up in Los Angeles with all the major game publishers previewing their upcoming releases. The big companies publishing these games have mammoth budgets and should be able to fund some quality control that supports the interest of public health. Apparently that line item is still not getting the focus it deserves.

Last week PCMag.com listed the 10 most anticipated games to be announced at E3. How many of them might trigger seizures in people with photosensitive epilepsy? 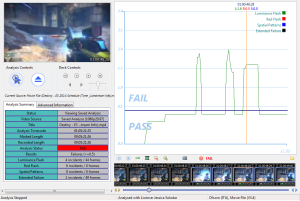 Destiny, a massively multiplayer first-person shooter game to be released in September, fails the safety test, too. Unlike the Nintendo game, it’s a completely new product. Both screen shots are taken from the Harding Flash and Pattern Analyzer, which tests images for seizure safety.

So far, 4 of them tested positive for seizure-inducing sequences–meaning they failed the Harding automated seizure safety test. This isn’t a final result because not all have enough “footage” available online for me to test adequately. Some may ultimately seem safe.

These tested as unsafe:

In other words, the patterns, flashes, and/or red intensity of onscreen images produce the exact type of visual stimulation–that’s been carefully defined by researchers–that places viewers at risk of photosensitive seizures. People with a genetic predisposition for these seizures are vulnerable, whether or not they have ever experienced a seizure before, and whether they even know they have this genetic trait.

Nintendo’s Mario games have been triggering seizures for more than 20 years. Reports began surfacing in 1992 about seizures from Super Mario. As a result, a study on video game seizures published in 1999 used Super Mario World to test subjects known to be photosensitive. And a lawsuit was filed in 2001 by parents of a boy who had a seizure while playing Super Mario Kart.

But what about new games such as Destiny? A whole new game provides the perfect opportunity to create an entirely novel visual experience. Why not architect the whole thing keeping in mind the seizure hazard that persists in many games?

In sum, some of the video game industry’s biggest players are continuing to ignore safety guidelines, placing the public at unnecessary risk. I don’t know where the myth originated that games produced nowadays don’t produce seizures.