It’s that time of year when lots of major video games are released, in advance of the holiday shopping season. The marketing build-up has been underway for many months, with snippets of gameplay shown at industry events and in reviews and cinematic trailers. By testing these snippets I can find out which of these games are likely to create a risk to people vulnerable to visually induced seizures.

The editorial staff of GamesBeat (part of tech publication VentureBeat) has already published an “early holiday gaming guide” with its choices for this year’s most eagerly anticipated titles.  So far I’ve tested what GamesBeat editors consider the biggest games to be released soon for multiple platforms. In upcoming posts I’ll share test results on their choices for PC-based games and for games exclusively built for Sony, Nintendo, and Microsoft gaming platforms. 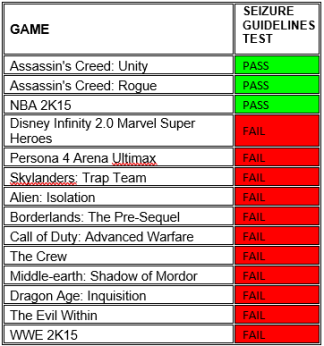 NOTE:  Subsequent testing of The Evil Within (using the final cutscene) on 11/13/2014 revealed that–as shown in this chart–the game fails to meet seizure reduction guidelines. My apologies to anyone who was misled by the original version of this post, in which I listed the game as safe to play.

To determine whether a video game is likely to trigger seizures in individuals susceptible to visually induced seizures, I run them through a photosensitive seizure safety analyzer, the Harding Flash and Pattern Analyzer. The FPA is widely used by producers and networks in the UK—including by the BBC—to ensure seizure safety of all material on broadcast TV. It examines video sequences for very specific and measurable image qualities that researchers have found can trigger seizures:

Visual safety criteria for video sequences are precisely defined in this document used by regulators of broadcast TV in the UK. The criteria were arrived at based on extensive clinical testing.

If the first clip I test of a game fails the seizure guidelines test, I note that and move on to test the next game. I typically test at least 4 or 5 additional clips of a game if no safety violations are found. I don’t do this testing while actually playing these video games. Instead, I work with video clips available online, some of which are official marketing and gameplay trailers; others are gameplay sessions posted by reviewers or fans. I do not test fans’ sequences from games that were modified with other software.

Your results could vary. Games I’ve listed as meeting image guidelines could have seizure-provoking sequences that I was unable to locate. Furthermore, the seizure threshold of individuals is affected by a number of factors including illness, hunger, stress, fatigue, and the player’s menstrual cycle, among others. So a game that seems OK the first time it’s played may trigger a seizure under different conditions.