← 2 of these 4 Xbox games don’t cause seizures!
Best new PC-only games are safe–pretty much →

Seizures from 7 of 11 best Nintendo games

A case history in a 1994 medical journal documented seizures in a 13-year-old boy that were triggered by a Sonic the Hedgehog video game. The Sonic games just tested continue to include seizure-inducing sequences.

Thinking about buying any titles that GamesBeat thinks are the season’s best Nintendo-only games? My testing shows that seven contain seizure-provoking visuals.

Among the Nintendo games that don’t comply with seizure safety guidelines are several that one would expect to be seizure-inducing. Two brand-new animé-style games, Persona Q and Hyrule Warriors, predictably violated the safety guidelines because animé typically does. Unsafe graphics in Sonic the Hedgehog and Super Smash Bros., two of the most well-established game franchises, are consistent with prior seizure-provoking games in their respective product families. 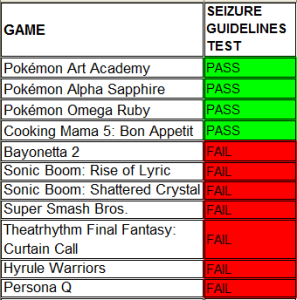 GamesBeat picked these Nintendo-only titles for its early holiday gaming guide this year.

Keeping in mind the so-called Pokémon incident in 1997, I was particularly curious about the seizure risk from the Pokémon games. That event was a Pokémon cartoon broadcast, when about 600 Japanese children simultaneously experienced seizure symptoms severe enough that they were taken to emergency rooms. Maybe because of that history, I thought, perhaps the developers of these games have taken extra care to reduce the risk of photosensitive seizures.

In fact, in the segments I tested of these three games, there were no images that violate seizure safety guidelines. Of the three Pokémon games, one isn’t really a game so much as a set of digital drawing and painting tutorials. Still curious, I put a few other Pokémon games through a seizure guidelines compliance assessment—the others passed, too.

Hold on, though. Although the Pokémon games themselves games comply with guidelines to reduce seizure risk, a promotional video for these same games violates the guidelines big time! How can that be? Here’s how: a just-released trailer for Pokémon Alpha Sapphire and Omega Ruby is done in a more traditional animé style, while the Pokémon games themselves still use the not-very-animated, not-very-2014, unlikely-to-provoke-seizures animation style of much older games. So beware of seizures from the marketing videos. 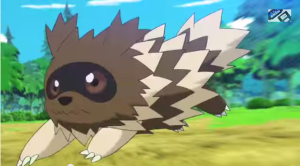 …than the Pokémon games it’s promoting. While the game is safe, the eye-catching trailer fails the seizure guidelines compliance test.

“To celebrate the upcoming release, the Pokémon Company has launched an animé style trailer for the two games…It’s pretty cool of Pokémon to release an animé styled trailer, given how popular the series and manga is. And even though the animé and game are very different from each other, fans of the series are still going to appreciate the extra effort.”

When The Pokémon Company in 2012 used this same marketing strategy with an animé promotional trailer to “celebrate” the release of non-animé Pokémon Black 2 and Pokémon White 2, YouTube viewers of the combined trailer lamented that the (seizure-inducing) animé in the promotional clip looked a lot better than the humdrum (visually safer) appearance of the games’ graphics.

These visually jazzed-up trailers would seem to raise customers’ expectations that in future releases The Pokémon Company intends to incorporate animé style into cutscenes and perhaps gameplay.

Here’s how I test for compliance with seizure safety guidelines. I submit downloaded gameplay clips and promotional trailers to the Harding Flash and Pattern Analyzer. The FPA is widely used by producers and networks in the UK—including by the BBC—to reduce the seizure risk in viewers from all material broadcast on TV. It examines video sequences for very specific and measurable image qualities that researchers have found can trigger seizures:

Sequences submitted for analysis are video clips available online, some of which are official marketing and gameplay trailers; others are gameplay sessions or cutscenes posted by reviewers or fans. I do not test clips uploaded by fans who have modified the game software. 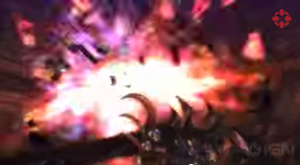 I typically test at least 4 or 5 clips of a game if no safety violations are found in the first clip. If I have a high level of suspicion due to the game genre and/or overall “look” that there might be unsafe images that I haven’t yet found, I may test a lot more clips. Before finding a clip of Bayonetta 2 that failed the test, I tested about a dozen clips. Its large, fast-moving, brightly colored designs led me to believe there had to be seizure-inducing sequences.

Your results could vary. Games that pass the compliance test could have seizure-provoking sequences that weren’t in the material I tested. Also, the seizure safety guidelines are designed to protect most (97 percent) but not all people with photosensitive epilepsy.

A game that has caused a person no problems over an extended period of use could still trigger a seizure in the same individual at a different time under different conditions. For reasons not understood by researchers, a person’s vulnerability to visually stimulated seizures changes over time. Photosensitive epilepsy can remain latent during childhood and typically emerges and peaks durng adolescence, and only about 25 percent of people who develop the condition will eventually outgrow it. Furthermore, the seizure threshold of individuals is affected by a number of factors including illness, hunger, stress, fatigue, alcohol, and the player’s menstrual cycle, among others.

3 Comments on “Seizures from 7 of 11 best Nintendo games”