Local TV news ran a feature on seven-year-old Khloe of Aiken County, SC after she experienced a 30-minute seizure triggered by a fidget spinner. She’d never had a seizure before. The spinners, the latest craze in toys/gadgets, have already drawn criticism because children can be injured by them or choke on the small parts, and because they create distractions in classrooms. Khloe’s experience demonstrates another reason to be wary of fidget spinners:  they create visual effects that can bring on seizures, even in people with no seizure history.

How does a spinner cause seizures? 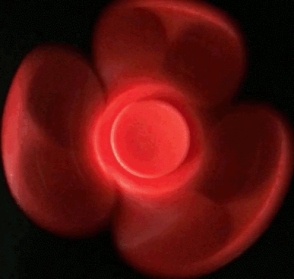 When seen from close range, a rotating fidget spinner creates rhythmic visual effects that can cause a seizure.

Seizures induced by visual stimuli can be triggered in people with a condition known as photosensitive epilepsy. Typical triggers include rapidly flashing strobe lights, video games, and TV, as well as rotating helicopter blades and spoked wheels. Because rotating blades and spokes make rhythmic visual patterns where parts of the image rapidly alternate between light and dark, they can have a similar effect on the brain’s visual cortex as flashing lights. Because photosensitive epilepsy can emerge in people with no history of seizures, people may learn they have the condition only after experiencing a seizure. 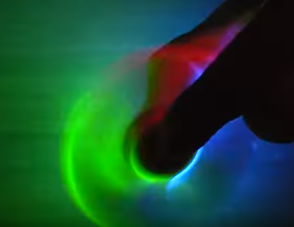 The risk of spinners triggering seizures is heightened by the flashing LED lights on some versions. Varleisha Gibbs, PhD, chair and director of the occupational therapy master’s program at Wesley College, expressed concern about this possibility in a May piece on Fatherly.com, “One of the triggers for seizure disorders is strobe lights…I would fear that could be a trigger.” Khloe’s seizure happened while she using a spinner with LED lights. She owns several others, without lights, that have not triggered seizures.

If kids turn out the lights to watch the spinner flashing in the dark, the strobing lights create even more of a seizure risk because of the contrast in brightness between the LEDs and the surrounding darkness.

The strobing effect of an LED spinner in motion captured on video. The frames shown here represent approximately half a second in real time.

Should I be concerned even if my child isn’t having seizures?

Your child could be having seizures you and the child aren’t aware of. Not all seizures involve convulsions, and many seizures aren’t noticed because their outward signs are subtle or simply not visible. Even if you can’t see them happening, seizures can leave your child with fatigue, confusion, mood problems, and other issues. We learned this after discovering that our daughter experienced unseen seizures while playing video games.

Vulnerable kids with ADHD and/or autism

The kids for whom these fidget spinners were initially intended to help (to increase focus, decrease anxiety) are probably more vulnerable than most other kids to visually induced seizures. Young people with ADHD and autism are more likely to have sensory processing issues that can include photosensitive epilepsy.

This frame was captured from the video clip about a seven-year-old’s seizure from her LED fidget spinner.

Note: Unfortunately, the WJBF TV news story about Khloe’s seizure, now posted on the station’s website and on YouTube, shows close-ups of the LED spinner in motion. Do not watch it if you are vulnerable to visually induced seizures! The clip includes images that exceed recommended limits on “safe” flash frequency. Watch anyway, at your own risk? Click here.