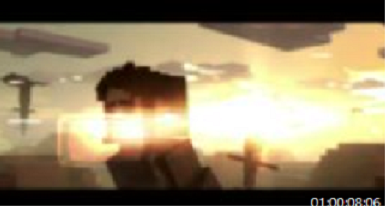 Flashing in this Minecraft sequence exceeds safety guidelines for photosensitive epilepsy and could provoke a seizure.

Playing video games during school used to be against the rules, but not anymore. In fact, more students play them in school now, and not necessarily because they’re bored. Popular video games are being brought by teachers into the classroom as teaching tools.

While parents can monitor which games their kids play at home, when an entire class is working on projects in Minecraft—as part of the history curriculum–parents may not know or have any say in the matter. If parents have concerns about the teacher’s choice of games, they’re typically thinking about age appropriateness of content or the amount of violence depicted. The likelihood of particular games triggering seizures is unlikely to be on anyone’s mind. Shouldn’t the games our kids are exposed to during school pass tests for seizure safety?

Some years ago I observed my daughter in math class using an educational application to practice “math facts.” She had nothing to do after she’d finished the in-class assignment, so she was sitting in front of a program that ran a flashy screen sequence to reward students for getting a certain number of answers correct. We had already requested that she not be exposed to computer screens during school. I began to wonder what other video games were being used in school and whether they might possibly provoke seizures.

Since then computer use in schools and elsewhere has grown tremendously. Teachers are increasingly incorporating more complex games into the curriculum to engage students and provide more creative, immersive, open-ended learning experiences. Using World of Warcraft, Minecraft, Civilization, and other games teachers are providing instruction in such diverse skills as problem-solving, collaboration, resource management, narrative style, and inference, and in subjects such as government, history, and language arts. This trend is expected to grow as more teachers enter the workforce who grew up playing these immersive games.

Which of these games are safe?

Recognizing the opportunity for a huge new market and a promising approach to raising student engagement and performance, video game companies and teachers are now collaborating on developing school-friendly versions of popular games. The education consultancy TeachThought recommends six video games as platforms teachers can use to enrich instruction in any content area at any grade level:

Civilization V – one minor safety violation in about a dozen gameplay clips and trailers.

Using the Harding Flash and Pattern Analyzer, I tested these six for compliance with internationally developed guidelines for image safety for individuals with photosensitive epilepsy. Only one game—Armadillo Run—had real potential to trigger seizures. Surprisingly, it’s also the only game in this group that has no fiery explosions, villains, or monsters that typically generate the problem flashes in video games. Instead it’s a puzzle game showing simulated action of shapes and patterns, with a clean and appealing illustration style. Without actually testing a game for seizure safety, you can’t make assumptions about what’s safe and what isn’t.

When I previously tested World of Warcraft and other MMORPGs, and again in more extensive recent tests, I didn’t find a seizure problem. Minecraft, however, contains images that can trigger seizures in individuals with photosensitive epilepsy.

With so many games to choose from, there’s no telling which will be incorporated into classroom instruction and homework. And teachers (as well as students, parents, and doctors) don’t know which games are seizure safe. (Most game companies probably don’t know, either.) When choosing video games as teaching tools, teachers are likely to be swayed by other factors: their level of familiarity with the game, recommendations of colleagues, the relevance of story lines to the curriculum, and the degree of age appropriateness for their students.

How to get people to pay attention to the image safety issue? More on that in my next post.